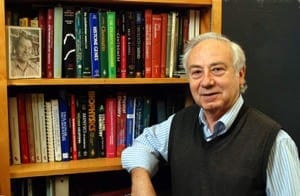 Evangelos Moudrianakis is a professor of biology whose research activities focus on the elucidation of the basic rules governing macromolecular assembly and the acquisition of new, "system properties" by these assemblies, i.e., toward an understanding of the rules of linkage between form and function.

He received his BS from the University of Athens in Greece and his PhD from Johns Hopkins University, where he also did his postdoctoral work.

The research activities of this laboratory are focused on the elucidation of the basic rules governing macromolecular assembly and the acquisition of new, "system properties" by these assemblies, i.e., toward an understanding of the rules of linkage between form and function. Diverse experimental systems are utilized in these studies.

Chromosome - Chromatin: The assembly, architecture and the control of transcription of the eukaryotic genetic apparatus are analyzed by cytological, biochemical and biophysical techniques ranging from in vitro cell culture and light and electron microscopy, through analytical ultracentrifugation and gel permeation chromatography, to x-ray crystallography and microcalorimetry. We have established that the histone "core" of the nucleosome is organized as a tripartite protein entity by the assembly of two dimers of H2A-H2B, one on each side of a centrally located H3-H4 tetramer. The contact interfaces of this assembly are considered as regulatory domains in the functional transitions of chromatin and are being probed by chemical, enzymatic and biophysical probes. We determined the crystal structure of the histone octamer to ca. 3Å resolution and the arrangement of its subunits have revealed novel modes for polypeptide assembly (i.e., histone fold, handshake motif) and protein-DNA recognition and binding (i.e., paired element motifs PEMs). The path of the double helix over the histone octamer has been determined and found to be guided by the 12 repetitive PEMs. Using these geometric constraints, a high resolution model for the nucleosome has been obtained and optimized through molecular dynamics simulations in collaboration with Drs. C. S. Tung and A. E. Garcia of Los Alamos. These simulations revealed that the nucleosome fluctuations are dominated by motions in the DNA backbone. The nucleosome is surrounded by a positive ion cloud with an average local density exceeding by a factor of 5-10 the bulk phase ion concentration. We also see high water density at the protein-DNA boundaries, at the DNA grooves and especially between the two apposing gyres of the nucleosomal DNA.

The energetics of the assembly of the nucleosomal components are analyzed microcalorimetrically through collaboration with Dr. E. Freire of the Biocalorimetry Center of this department. The patterns and specificity of protein-DNA interactions are analyzed by chemical, topological and structural methods. Nucleosome reconstitution experiments utilizing core histone subunits (regular and acetylated), transcription factors and specific sequences of circular DNA are in progress.

Coordinates from the crystal structure of the histone octamer and the nucleosome model are below:

Bioenergetics: The mechanism of protein thermostability and enzyme thermoactivity in Archaea are studied. Particular emphasis is focused on the role of osmolytes in protein stabilization.

Selected Publications on Histones and Nucleosomes

Eickbush TH, Moudrianakis EN (1978) The compaction of DNA helices into either continuous supercoils or folded-fiber rods and toroids. Cell 13:295-306

Karantza V, Freire E, Moudrianakis EN (2001) Thermodynamic studies of the core histones: stability of the octamer subunits is not altered by removal of their terminal domains. Biochemistry 40(43):13114-23.