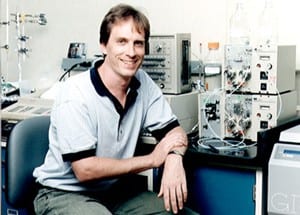 Kyle Cunningham is a professor in the Department of Biology. His research focuses on mechanisms of calcium signaling and cell death. Professor Cunningham received his PhD from University of California, Los Angeles and then went on to do his postdoctoral work at Whitehead Institute.

Calcium signals regulate a wide variety of cellular processes including contraction of muscle fibers, exocytosis of hormones and neurotransmitters, gene expression, and programmed cell death. Most of the cellular proteins that control or respond to calcium signals are widely conserved in nature and operating similarly in diverse species. A primary goal is to develop a complete understanding of calcium signaling in a simple cell type (the bakers’ yeast Saccharomyces cerevisiae) and to apply this knowledge toward understanding and treating human diseases.

A key target of calcium signals in humans and in bakers’ yeast is a protein phosphatase known as calcineurin. In humans, calcineurin is crucial for the rejection of transplanted tissue and for the abnormal growth of the heart during heart failure. Drugs that inhibit calcineurin, such as Cyclosporin A and FK506, are therefore useful to maintain survival of transplanted tissues but they cannot be used to delay heart failure because the immunosuppressive side effects. To gain better control of calcineurin signaling, we identified a conserved family of proteins that naturally regulate calcineurin (the RCANs). Depending on their level of expression and on their modifications, RCANs can stimulate or inhibit calcineurin function. This feature makes them ideal candidates for tissue-specific tailoring of calcineurin function. Our current research on RCANs focuses on precisely how these proteins regulate calcineurin in human cells and in bakers’ yeast as a model system. The findings have implications for therapies to treat heart failure, organ transplantation, certain cancers, and potentially even Down syndrome (human RCAN1 very likely contributes to several abnormalities associated with trisomy 21).

Calcineurin and its upstream regulators also function in bakers’ yeast and many fungal pathogens of humans to survive our attacks with antibiotics. The typical azole-class antibiotics do not normally kill fungal pathogens, leaving that task to our immune systems. But when fungal calcineurin is blocked with Cyclosporin A or FK506, the azoles cause massive death of fungal cells. By studying fungal RCANs and ion channels upstream of calcineurin, we may identify new proteins that can be targeted for development of non-immunosuppressive fungicidal drugs.

How antibiotics trigger cell death in fungi and how calcineurin prevents it may shed light on a mysterious type of cell death known as necrosis-like cell death. Necrosis-like cell death can occur in bakers’ yeast during their normal mating cycle, suggesting it may be a form of programmed cell death that somehow benefits the species similar to apoptosis in animals. Similar necrosis-like cell death contributes to the activity-dependent degeneration of neurons and the pathogenesis of neurodegenerative disease. Many other tissues may also be harmed by inappropriate necrosis-like cell death. By exploiting the powerful genetic technologies of bakers’ yeast, we are identifying pro-death genes and regulatory pathways that may be antagonized by calcineurin. Related genes in pathogenic fungi may help them resist fungicidal antibiotics. Related genes in humans might be contribute to tissue damage during stroke, for example, and therefore new medications that target these genes or their products may be useful for controlling a variety of human injuries or conditions.