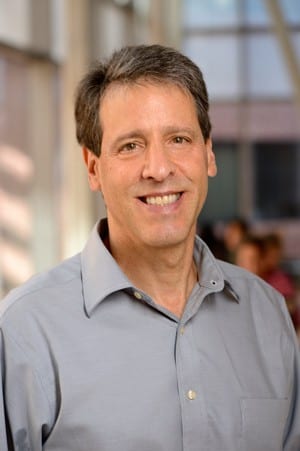 Andy Hoyt received his PhD from the University of California, Berkeley. He then went on to complete his postdoctoral work at Massachusetts Institute of Technology. His lab focuses on mechanisms of cell division.

The mitotic segregation of replicated chromosomes ensures the proper inheritance of the genetic information. This essential cellular function is accomplished by the spindle, a microtubule-based motile organelle. Our research focuses upon both the mechanics of mitotic spindle action and the regulation of its function within the context of the cell cycle. Our biological system of choice for addressing these research questions is Baker's yeast (Saccharomyces cerevisiae). Our studies make great use of the powerful molecular genetics techniques possible with yeast. In addition, we employ techniques from cell biology and biochemistry.

The spindle is a dynamic organelle. In each cell cycle it undergoes a programmed series of motility events that ultimately leads to the segregation of replicated chromosomes. Despite being well characterized at the cytological level, the force-producing mechanisms that drive spindle movements have only become apparent within the past few years. We and others have found that microtubule-based mechanochemical enzymes (or "motor proteins") produce spindle movements. We have defined mitotic roles for five motors of the kinesin-related family and a dynein family motor. These motors all have homologues in higher cells (including human) and we believe that many aspects of their functions are conserved. Determined roles in spindle assembly and elongation (anaphase B) are depicted in the figure. We also have found roles for four of the motors in properly positioning the spindle within the cell, another process essential for cell division. Currently, we are determining how dynein and kinesin-related Cin8 accomplish their roles and how these actions relate to their molecular structures. We also study how the actions of these motors are regulated during the cell cycle.

The current major interest in the lab concerns the mechanism by which the events occurring at the mitotic spindle are integrated with other cell cycle-specific events. When spindle function is compromised, the normal response is to arrest cell cycle progression in mitosis. This response is known as the “spindle checkpoint”. Failure to arrest can lead to genomic instability, a phenotype commonly observed in cancer cells. In order to understand how spindle malfunction signals the cell cycle regulatory machinery, we are analyzing checkpoint gene-products required for mitotic arrest. We discovered a conserved kinase, Bub1, that acts at an early step in the generation of the signal indicating spindle damage. Loss of function of Bub1 and other spindle checkpoint proteins has been linked (by other labs) to cancer and aneuploidy diseases in humans. Our recent studies indicate that Bub1 and other checkpoint proteins are required to specify normal kinetochore structure/function, a role beyond their requirement for eliciting the spindle damage signal.

Proposed roles for four mitotic spindle motor proteinsBimC-like Cin8p and Kip1p overlap in spindle assembling and elongating activities. They act by cross-linking and sliding midzone anti-parallel microtubules. Prior to the onset of anaphase, Cin8p an Kip1p are opposed by the actions of kinesin-related Kar3p, although the mechanism of this motor is not clear. (Two mechanisms are suggested here. There exists evidence to support both.) Dynein is proposed to contribute to pole separation from outside the poles at the cell cortex. Arrows indicate motor movement relative to microtubule substrate. SPB = Spindle Pole Body; cMT, kMT, and nkMT = cytoplasmic, kinetochore, and non-kinetochore microtubules.