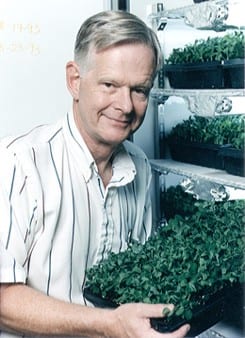 For a number of years, my laboratory has worked on aspects of the biochemistry of photosynthesis in higher plants. In particular, we have studied how chloroplasts make ATP and the transport of ions and metabolites across the limiting membranes of chloroplasts. Our work on ATP synthesis has evolved from studies of the coupling between electron transport and ATP synthesis to protein biochemistry.

ATP synthesis in chloroplasts is catalyzed by a remarkably complex enzyme known as ATP synthase, or CF1-CF0. The synthase functions to couple proton translocation to ATP synthesis and consists of nine different polypeptide chains and a total of about 20 polypeptides. The synthase may readily be separated into two parts, CF1, a hydrophilic, extrinsic membrane protein of 400,000 Mr and CF0, a hydrophobic membrane protein. CF1. contains the catalytic sites of the synthase, whereas CF0functions to translate protons across the thylakoid membrane and to bind CF1. CF1 is comprised of five different proteins, labeled -, in order of decreasing molecular weight. There are three copies each of and , but just one each of , and . The and polypeptides form a heterohexamer that surrounds, probably, a large part of the subunit. Although the three subunits and the three polypeptides are chemically identical, the interactions among polypeptides and the smaller proteins of CF1, especially , necessarily impart an asymmetry to an otherwise symmetrical 33 hexamer. This unusual structural asymmetry has intriguing ramifications to mechanism and to nucleotide binding by CF1.

The elucidation of nucleotide binding sites of CF1 is challenging in that there are six sites, located at / interfaces. Some of the sites contribute to stabilization of the 33 hexamer, whereas others are involved in catalysis and its regulation. The structural asymmetry of CF1 very likely contributes to the asymmetry of the properties of the nucleotide binding sites. Using biochemical as well as biophysical approaches, we scrutinize the effects of nucleotide binding site occupancy on the stability of CF1 as well as on its catalytic activity. Techniques used in these studies have been: stopped-flow fluorescence spectroscopy, fluorescence anisotropy, FPLC, HPLC, and differential scanning calorimetry.

The complexity of the ATP synthase is perplexing. Why are there so many polypeptide chains? What are their functions? We can prepare CF1 deficient in either the or units ? or both? and can isolate CF1 in which the subunit has been significantly modified. Overexpression of the genes for the , and subunits has been achieved and the products may be obtained in active form. Analysis of the site-directed mutant forms of the smaller CF1 subunits has been, and will continue to be, fruitful in elaborating their functions.

In summary, our efforts in the ATP synthase area are focused on protein-protein and protein-ligand interactions, including how ligand (nucleotide) binding site occupancy can affect interactions among subunits as well as activity.

Another distinct project in my laboratory deals with membrane transport. The chloroplast is surrounded by a double membrane system known as the envelope. The inner membrane of the envelope is the permeability barrier and contains specific proteinaceous transporters. We are especially interested in the transport of ions across the inner envelope membrane. These ions include H+, NO2?, Cl? and organic acids. Biophysical, biochemical and, more recently, molecular biological methods are used in these studies. 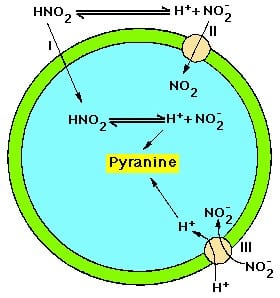 Another distinct project in my laboratory deals with membrane transport. The chloroplast is surrounded by a double membrane system known as the envelope. The inner membrane of the envelope is the permeability barrier and contains specific proteinaceous transporters. We are especially interested in the transport of ions across the inner envelope membrane. These ions include hydrogen, nitrite, chloride and organic acids. Biophysical, biochemical and, more recently, molecular biological methods are used in these studies.

McCarty, R.E. 2006. The decay of the ATPase activity of light plus thiol-activated thylakoid membranes in the dark. J Bioenerg Biomembr.38, 67-74.

Nowak, K.F, Tabidze V., McCarty, R.E. 2002. The C-terminal domain of the epsilon subunit of the chloroplast ATP synthase is not required for ATP synthesis. Biochemistry. 41, 15130-4.

Cunningham, K. M. and McCarty, R.E. 2000.   Influences of energization and nucleotide binding on the reaction of Lucifer Yellow vinyl sulfone with the alpha subunits of the chloroplast ATP synthase. Biochemistry, 39a (15), 4391-4398.